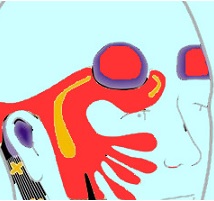 Face, Nose and Sinus pain: Other:

The face, nose and sinus structures are predominantly supplied with sensation from a nerve coming through the skull base called the “trigeminal nerve”. It consists of three branches, upper (ophthalmic), middle (maxillary) and lower (mandibular). It is the fifth cranial nerve and these branches are known as V1, V2 and V3! Pathology involving one of these branches can cause pain in the distribution of other branches or in more remote areas according to connections of the trigeminal nerve with other nerves in the skull. This is called “referred neuralgia”. An understanding of the anatomy and function of this nerve and its connections is necessary to explain and diagnose headache causing conditions in this region.

The following conditions are representative but not all inclusive.

Infections generally due to staph or strep causing inflammation, redness, swelling and pain in skin which can spread to involve adjacent areas or spreads internally to cause brain abscess, meningitis and death (severe skin infections can cause serious complications !!)
Aggressive treatment with antibiotics often by intravenous therapy and attention to the causative lesion (eg abscess or boil) and predisposing conditions (eg poorly controlled diabetes)

Temporal Arteritis
Autoimmune inflammation of the artery of the “temple region”. Often presents with frontal and temporal headache. Common in the elderly and can be diagnosed on basis of blood tests and artery biopsy. May involve the artery of the eye and cause blindness. Treated with steroids and immune suppression.