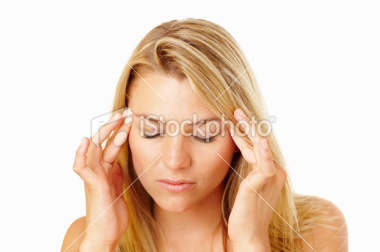 Migraine is common- affecting approximately 15% of females and 6% of males.
It is believed that women are more susceptible due to the cyclic fluctuations in hormones associated with the menstrual cycle,
making women more vulnerable at certain times in the cycle.

Approximately 80% of Migraine attacks do not have an Aura- An Aura involves symptoms that precede an impending attack of head pain including- visual symptoms (blurred vision, blind spots etc) and sensory changes such as pins and needles in the face or hands and arms…see Classic Migraine .

Common Migraines- do not have an Aura and usually begin with pain in the face and head regions, usually on one side at any time. Pain can vary in quality from a pounding-throbbing sensation to a severe ache often associated with nausea and sometimes vomiting. Intolerance to light and noise is also common. There is usually a history of such attacks reoccurring over many years and lasting for hours and sometimes days. Many triggers may be cited by the sufferer as precipitating an attack such as: skipping meals, certain foods, hormonal changes, oversleeping, stress etc.

Most migraine medications are designed to address the attack itself and provide relief or prevent the onset of an attack. Other treatments may be tailored to address underlying causes and aggravating factors as well as avoiding triggers. See “treatments section”…

It is also important to note that many migraines have a number of ‘ingredients’ which combine to produce an attack. For further information please see the rollover sections on the homepage head illustration to see specific problems in specific parts of the head, neck, face, diet etc.