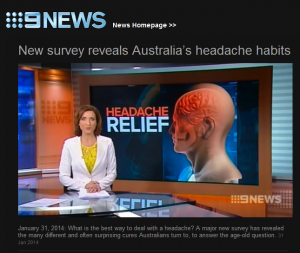 Fresh Target in Hunt for a Migraine Cure By SHIRLEY S. WANG.. . The hunt is intensifying for new treatments for migraines, the common and debilitating headaches that have confounded scientists for decades.

Of greatest focus for researchers is a brain chemical known as CGRP, which appears to play a role in the transmission of pain, but not in other brain functions, such as cognition or mood. Researchers are trying a variety of experimental drugs to stop CGRP from working by blocking its receptors in the brain. Others are working on artificial antibodies that could soak up the chemical in the bloodstream or brain before it can trigger migraines.

Experts say the need for new medicines to treat migraine pain once it begins is great because current drugs only provide some benefit for 50% to 60% of sufferers and can’t be used in people with heart disease or who have had a stroke. Also, they aren’t a cure, and in many cases, the headaches tend to come back within 24 hours.

There also is a separate category of preventive drugs, which tend to be used by a small proportion of people who suffer from more frequent or debilitating migraines.

“People need migraine drugs that have a rapid onset of action, that take the pain away and keep it away,” says Richard Lipton, director of the Montefiore Headache Center in New York.

Headache disorders are among the most common medical conditions world-wide. More than 1 in 10 adults globally are affected by migraines, which can be incapacitating, according to the World Health Organization. International studies have found that 50% to 75% of adults have reported a headache in the past year, with up to 4% of the global population reporting having a headache in half or more of the days each month, WHO says.

There isn’t such a thing as a “regular” headache, but rather more than 300 types, says David Dodick, a professor of neurology at the Mayo Clinic’s branch in Phoenix and chairman of the American Migraine Foundation. People having migraines usually experience intense pain, sensitivity to light, dizziness and sometimes nausea and visual and sensory symptoms called auras. Two other major types of headaches are caused by tension or medication overuse.

Nonsteroidal anti-inflammatory painkillers such as ibuprofen work for some migraine sufferers. But the class of migraine medicines that hit the market in the 1990s called triptans remain the best or only treatment option for many patients. Nevertheless, about half of sufferers don’t respond to them or can’t take them because of other health reasons.

CGRP, which stands for calcitonin gene-related peptide neurotransmitter, has long been thought to play a role in migraines, but for much of that time for the wrong reason. Part of the confusion was because of a misunderstanding of migraines themselves.

Why they occur still isn’t clear, but specialists say they have recently begun to understand the migraine as a brain disorder and not a vascular disorder. Until about 12 years ago, they were believed to stem from constriction of blood vessels in the brain. The dilation of the vessels to compensate then led to the throbbing pain, so the thinking went.

Experts disagree about how a migraine is triggered, but the trigeminal nerveâ€”an important pathway that carries sensory information about the faceâ€”and its connections to numerous other nerves and the brain appear to be responsible for transmitting the pain.

Researchers also have isolated certain genes that might be linked to a predisposition for migraines, Dr. Dodick says.

Triptans, which promote blood-vessel constriction and inflammation, block the release of CGRP in the trigeminal nerve. While CGRP does aid the blood-vessel dilation process, its role activating the nerves in the brain appears to be the key when it comes to migraine pain.

In the mid-1980s, Peter Goadsby, a neurologist and headache specialist at the University of California San Francisco, and his colleagues found that CGRP is released in migraines and that triptans decreased CGRP action.

Several researchers and companies have been trying to develop drugs that bind to the CGRP receptors to prevent the chemical from activating the pain network. But because CGRP has a complex receptorâ€”the slot where the molecule must bind in order to initiate actions in the bodyâ€”it took chemists 15 years to figure out how to block the effects of CGRP, and even longer to develop a compound that could be taken orally, says Dr. Goadsby.

Bringing to market CGRP blockers, or antagonistsâ€”the most advanced of the new drugs in development for migrainesâ€”has proved challenging. Several investigational compounds have been shown to be toxic to the liver, a challenge that highlights the difficulty in developing drugs for conditions that affect the brain.

CGRP antagonists don’t appear to work as well as triptans, but the blockers have an advantage in they don’t appear to cause cardiovascular complications, says Stephen Silberstein, a neurology professor and director of Thomas Jefferson University’s Headache Center in Philadelphia.

“You trade one kind of risk for another,” says Dr. Silberstein, who has served as an investigator on several companies’ clinical trials.

Merck & Co. had a promising CGRP-receptor antagonist under development but discovered in late-stage clinical-trial testing that some patients experienced liver enzyme changes. In July of last year, the company said it was discontinuing development of the compound, telcagepant, after looking at all its trial data. Germany’s Boehringer Ingelheim GmbH was also working on a CGRP antagonist but canceled development. A spokesman declined to comment.

Bristol-Myers Squibb Co. is conducting several early stage studies on CGRP antagonists and other companies are testing or may begin development of similar compounds as well.

Researchers and companies also are trying to develop artificial antibodies that, when injected, would glom onto CGRP in the bloodstream or brain, before it reaches the receptors in the brain, or by blocking the receptors.

Research into these biologic antibody-based approaches is at an earlier stage than the testing of antagonist drugs, but antibodies eventually might be able to block CGRP action regularly so that migraines don’t ever begin.

“The CGRP story is a story of developing an acute treatment for migraine,” says Dr. Goadsby. “But the antibody story is testing the larger idea [that] if you blocked continuously CGRP, would you have a preventive treatment.”